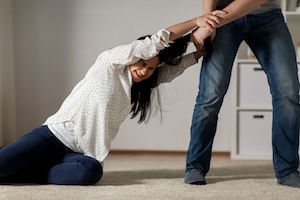 Oklahoma law defines domestic assault and battery as the threat (assault) of force or violence and the actual use of force or violence (battery) upon a member of the household. These are actually two different crimes, but since they often occur together, they are also often charged together.

Assault and Battery by Strangulation

When an argument becomes physical, brute strength is often used against the partner or another household member. And hands and fists are often the tools of choice because they are readily available.

For the purposes of this law, “strangulation” is defined as any form of asphyxia; including, but not limited to, asphyxia characterized by:

Penalties for Domestic Assault and Battery by Strangulation in Oklahoma City

The crime is punishable by a prison term of up to three years, a fine of up to $3,000, or both for the first offense.

In addition, the court may mandate that the defendant attend classes and programs such as anger management, counseling, and substance abuse treatment. Any treatment is at the defendant’s expense.

Elements of Domestic Assault and Battery by Strangulation in Oklahoma

Like all crimes in Oklahoma, this one has a number of elements all of which must be proven beyond a reasonable doubt by the prosecution. If any element remains unproven, there can be no conviction.

Here are the elements:

These cases are heavily fact-bound. Therefore, every fact may be important and should be discussed with your Oklahoma City attorney. Call today to get the help you need.

Our lawyer is well positioned to advise you accordingly, as he has the necessary training and experience. He has the wit and tenacity to match the skill of the Oklahoma City prosecutors.

You can also submit an email question from the top right corner of this page. We will respond to all questions as soon as possible.